Trust in me in all you do

Have the faith I have in you

Love will see us through, if only you trust in me

Etta James, “Trust in Me”

I can easily imagine nonprofit fundraisers singing these lyrics to their donors. Trust is a key to unleashing our generous spirits. Unfortunately, nonprofits will be singing sadder blues songs when they read reports about Americans’ trust in each other and in institutions.

Our trust in each other has been declining since the 1970s. According to researchers using data from the General Social Survey, trust in others dropped to 33% during the recent recession, down from a high of 46% in the early 1970’s. Sociologist Josh Morgan wrote an article last year describing similar downward trends in other surveys. He mapped the trends in this GIF (darker red means less trust):

The General Social Survey and an annual Gallup Poll also show Americans’ declining trust in institutions. The surveys don’t track the nonprofit sector as a whole, but do show declining trust in churches and educational institutions as subsets of the sector. The annual Edelman Trust Barometer reports a global decline in trust in non-governmental organizations (NGOs) from 2014 to 2015. According to a Reuters article about the 2015 Barometer, respondents across the world “found concern that NGOs were too focused on money, losing touch with the public, using funding poorly, corrupt, or incompetent.”

The national Overhead Myth campaign hopes to convince donors to look past budgets and financial ratios. However, in a recent BBB Wise Giving Alliance survey, “donors still consider finances to be the most important indicator of trust” in nonprofits. 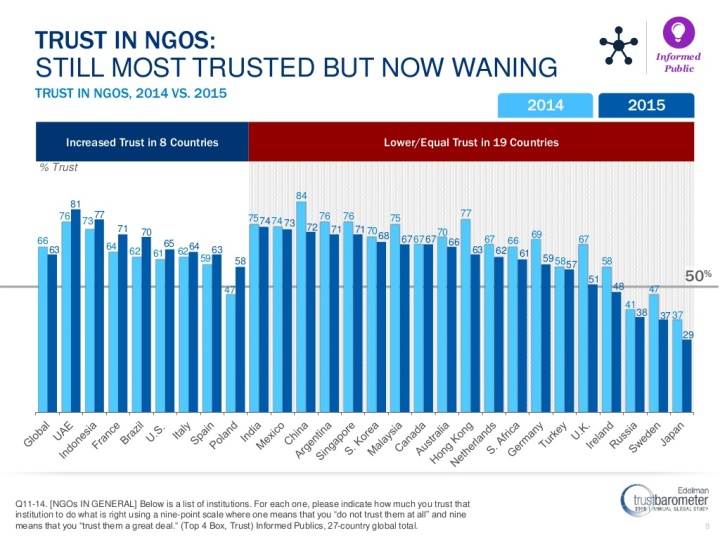 One-third of Americans don’t trust nonprofits to “do what is right.” That’s not good.

Our lack of trust in institutions and nonprofits also showed in the most recent Volunteering and Civic Life in America report from the Corporation for National and Community Service. The report noted one- or two-year declines in 16 of 20 indicators of civic health, including indicators for trust in others, trust in public schools, and volunteerism.

It could be easy for nonprofits and foundations to ignore these trends. Overall, charitable giving started rising in 2013. Foundations’ endowments and grantmaking budgets are steadily climbing back to their pre-recession highs. And, individuals and institutions are increasingly deploying their assets for environmental and social results through impact investing strategies.

The research cited above and Pew’s Millennials in Adulthood report should be wake-up calls to fundraisers and their hopes of attracting new donors:

I’m not normally a “glass half empty” type of guy. But, I don’t read these reports and trends as a positive signal from the future for nonprofits. Most nonprofits already under-invest in the tools and talent necessary for effective donor stewardship, communications, transparency, and relationship-building. Their poor donor retention rates are one consistent result.

Can nonprofits – and the funders who support them – find new ways to build durable, trusting relationships with donors? What do you think?

One thought on “Signals from the Future (part 2): Failing Trust”